In order to gain weight, whether sea turtles or humans, you need to consume more on a regular basis than you would to just maintain your weight. On 9/20 a stool sample was sent to Dr. Craig Harms* to check for parasites based on El’s continued weight loss and that she had a large quantity of parasites (leaches) externally when brought in. Testing was negative for common worms. 9/21/12 Dr. Harms prescribed a broad spectrum antibiotic and suggested El’s tank water level could be raised to 25 inches. 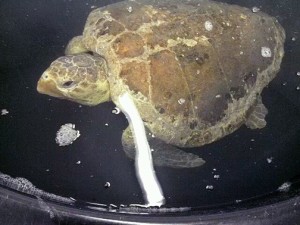 When weighed 9/27/12 EL was 122.54, another loss (6.82 lb) but less than the previously. When re-weighed 11 days later, 10/8/12, EL was 131.2 lb, a gain of 8.58 lb. She is a different girl after the broad-spectrum antibiotics and a better environment (deeper salt water) . Her appetite is improved, which is evident by her consistently eating a higher volume of food. She still is the messiest turtle we’ve ever had and continues to poop each day halfway thru eating. Therefore, we cannot see her dropping all the fish heads (which are very nutritious but she does not like) and we can hardly take a full breath because the room is small and the loggerhead poop is overwhelming. El is messy and not so dainty, but just looking at her ragged carapace and partial right front flipper gives you the feeling she has fought the fight and survived.