A call came into the hotline from vacationers reporting turtle eggs in the surf.  When the Nest Response Team arrived on the scene, Allen and family explained that the rough surf had uncovered a spot where eggs were coming out of the sand.  They were able to save 27 eggs and put them safely in the sand on the dune.  Realizing that an unmarked nest (affectionately called a “wild nest”) was being over washed, the team began digging in the area Allen pointed out.  The crashing waves made it difficult to identify exactly where to dig but after several tries turtle superhero Allen found more eggs just a few inches beneath the surface.  The Nest Response Team carefully removed another 36 eggs while others helped hold the sand back and shouted out each time a wave was about to hit. 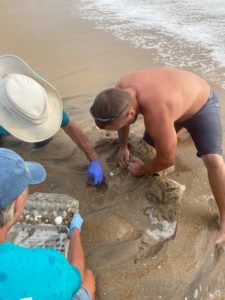 N.E.S.T. responders Tony and Susan dug a new nest site high on the dune.  They carefully nestled all 63 of the rescued eggs into their new home officially making it Nest #46. 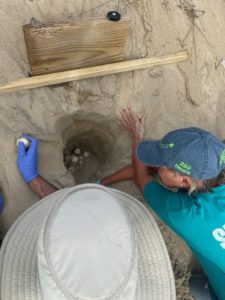 Relocating rescued eggs into a new nest in the dunes

Thanks to the quick actions of our vacationing super heroes there is a good chance these eggs will hatch in the near future!  If you see a sea turtle nest or a sea turtle in need here in the Outer Banks, give N.E.S.T. (Network for Endangered Sea Turtles) a call on the hotline at 252-441-8622. 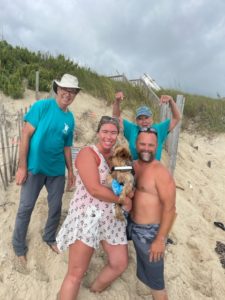 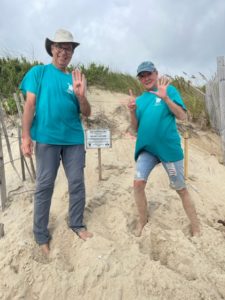