ATV turtle patrol Kevin headed south in search of turtle tracks and boy did he find some.  The first set of tracks was a false crawl into a pile of debris left from a recent storm.  A short distance later he found a second false crawl below the high tide line.  Finally he found a set of sea turtle tracks and a nest site.  A false crawl is when a sea turtle comes up the beach but turns around and goes back out without creating a nest or laying eggs. 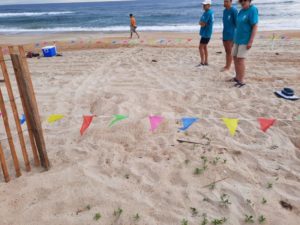 Our response team showed up and got right to work.  A couple people measured the turtle tracks and based on the track pattern determined it was a Loggerhead sea turtle.  Loggerhead turtles have a zig zag path.  After a brief team consensus on where the eggs might be located, a couple of team members began digging down to look for the egg chamber.  On our first try, Emma found the eggs.

N.E.S.T. participates in a study analyzing the DNA of sea turtle eggs along the south eastern U.S. coast.  An egg shell contains the DNA of the mother turtle as she produces the egg shell.  This DNA gives researchers a great picture of where a sea turtle nests along the east coast, how far do they travel between each nest site (a couple miles or a couple hundred miles), how often do they nest in a season and how many years until they nest again. 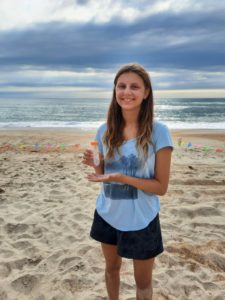 Now team members work together to secure the nest site.  Stakes, string and rebar are used to not only protect the nest site, but also serve as markers in case a storm takes out part of a nest.  We record measurements from the various stakes and strings so we can help locate the nest should part of the nest site sustain damage due to a storm or predator. 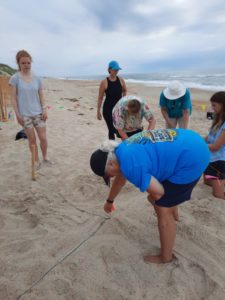 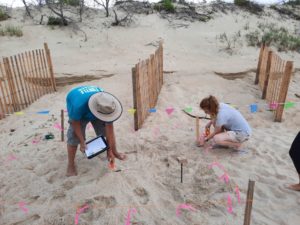 Measuring the stakes to the nest chamber

This team had to work fast as a storm was approaching.  Congratulations on a job well done even while under pressure from the weather.  It didn’t start raining until we reached our cars to go home. 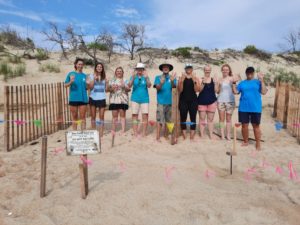