Green Sea Turtle – named for the green color of the fat under its shell.

They are easily distinguished from other sea turtles because they have a single pair of prefrontal scales (scales in front of its eyes), rather than two pairs as found on other sea turtles. Head is small and blunt with a serrated jaw. Carapace is bony without ridges and has large, non-overlapping, scutes (scales) present with only 4 lateral scutes. All flippers have 1 visible claw. The carapace color varies from pale to very dark green and plain to very brilliant yellow, brown and green tones with radiating stripes. Hatchlings are dark-brown or nearly black with a white underneath and white flipper margins. 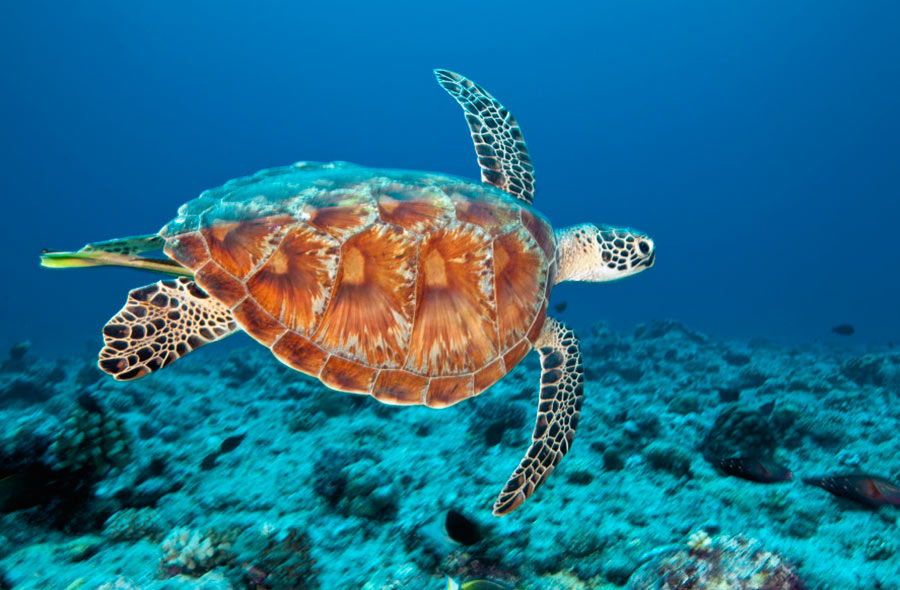 Green Turtles are generally found in fairly shallow waters (except when migrating) inside reefs, bays, and inlets. The turtles are attracted to lagoons and shoals with an abundance of marine grass and algae.

Female Green Turtles, between the age of 20 to 50, will usually mate every 2 to 4 years.

Female Green Turles may lay as a many as nine clutches within a nesting season (overall average is about 3.3 nests per season) at about 13-day intervals. Clutch size varies from 75 to 200 eggs, with an average clutch size of 136 eggs and incubation ranges from about 45 to 75 days.

U.S. – Listed as Endangered (in danger of extinction within the foreseeable future) in Florida, Pacific coast of Mexico and Threatened in all other areas under the U.S. Federal Endangered Species Act.

International – Listed as Endangered (facing high risk of extinction in the wild in the immediate future) by the International Union for Conservation of Nature and Natural Resources (IUCN).

A major factor contributing to the green turtle’s decline worldwide is commercial harvest for eggs and meat. Fibropapillomatosis, a disease of sea turtles characterized by the development of multiple tumors on the skin and internal organs, is also a mortality factor and has seriously impacted green turtle populations in Florida, Hawaii, and other parts of the world.

Other threats include loss or degradation of nesting habitat from coastal development and beach armoring; disorientation of hatchlings by beachfront lighting; excessive nest predation by native and non-native predators; degradation of foraging habitat; marine pollution and debris; watercraft strikes; and dredging and commercial fishing operations.