Hawksbill – named for its narrow head and hawk-like beak.

The Hawksbill is a small to medium-sized marine turtle having an elongated oval shell with overlapping scutes on the carapace, a relatively small head with a distinctive hawk-like beak, and flippers with two claws. General coloration is brown with numerous splashes of yellow, orange, or reddish-brown on carapace. The plastron is yellowish with black spots on the intergular and postanal scutes. Juveniles are black or very dark brown with light brown or yellow coloration on the edge of the shell, limbs, and raised ridges of the carapace. 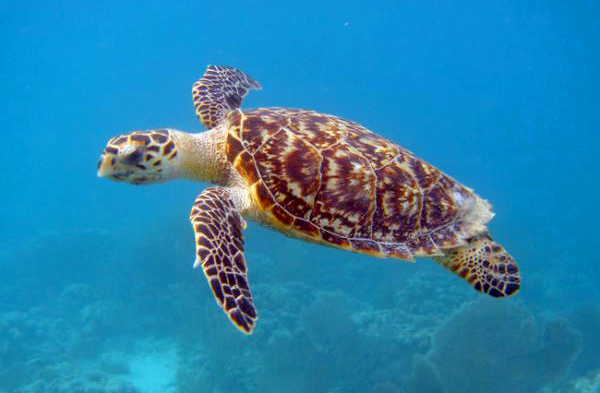 Adult Hawksbill Sea Turtles have been known to grow up to 1 meter (3 ft) in length, weighing around 80 kilograms (176 lb) on average. The heaviest Hawksbill ever captured was measured to be 127 kilograms (280 lb). They have a life span between 30 – 50 years.

The Hawksbill’s narrow head and jaws shaped like a beak allow it to get food from crevices in coral reefs. They eat sponges, anemones, squid and shrimp.

Female Hawksbill Turtles, between the age of 30 to 50, will usually mate every 2 to 3 years.

Female Hawksbill are known to nest from three to five times within a nesting season (mean is about 4.1 nests per season) at intervals of approximately 14 – 16 days. Mean clutch size varies from about 130 to 140 with an average incubation of 55 to 60 days.

International – Listed as Critically Endangered (faces an extremely high risk of extinction in the immediate future) by the International Union for Conservation of Nature and Natural Resources (IUCN).

The greatest threat to Hawksbill Sea Turtle is the harvesting for their prized shell, often referred to as “tortoise shell.” In some countries the shell is still used to make hair ornaments, jewelry, and other decorative items.