Led by our founder Millie Overman, NEST was established in 1995. N.E.S.T. is an all-volunteer 501(c)(3) non-profit organization dedicated to the protection and conservation of sea turtles and other protected marine wildlife on the Outer Banks of North Carolina from the Virginia line to south Nags Head. N.E.S.T. is committed to contributing to the preservation of these species through research and rescue and rehabilitation efforts and to fostering greater understanding and appreciation of these species and their habitat through education and enhanced public awareness. We work in partnership with the North Carolina Wildlife Commission and the North Carolina Aquarium on Roanoke Island. We also work closely with the townships in Dare and Currituck Counties on issues related to sea turtles. 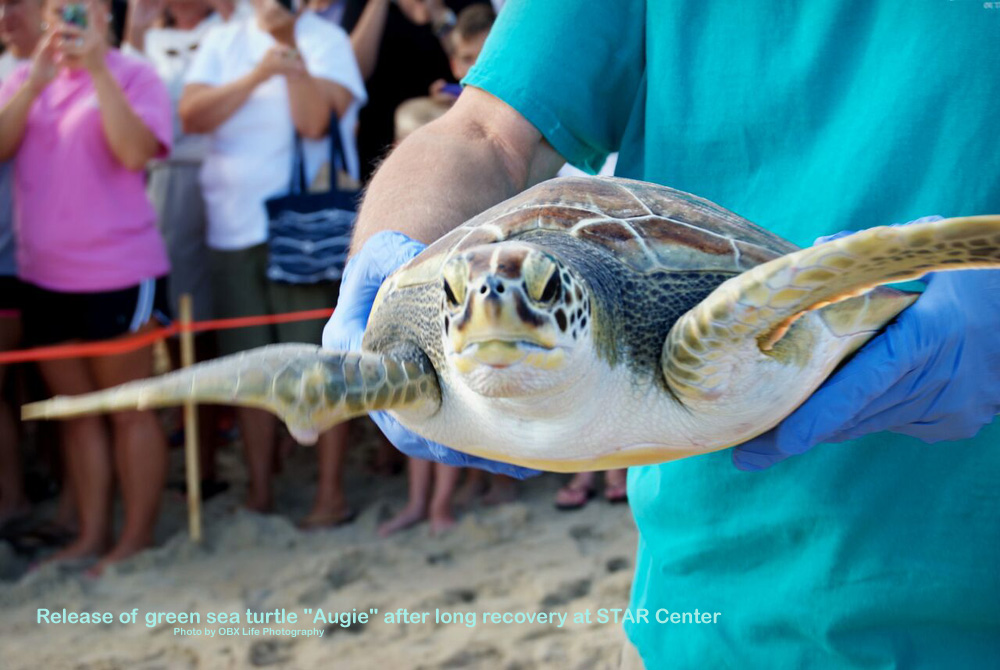 Successful sea turtle rescue, rehabilitation and now back to the ocean!

Turtle monitoring on the Outer Banks began in earnest in 1994. Pam Rowe and Robbie Fern, were permitted by the North Carolina Wildlife Resources Commission (NCWRC) to watch and protect the nests. They enlisted Amelia (Millie) Overman, among others to help. When Pam and Rob moved away, Millie took the required training to receive her own Endangered Species Permit from the NCWRC to serve as coordinator of turtle response from South Nags Head to the Virginia line. The group received permission from local town and county governments for early morning ATV runs to locate and protect nesting sites and for overnight stays on the beach to monitor for hatchings. A 24-hour telephone hotline was also  established.

One night while waiting for a nest to hatch, there was discussion about formalizing the organization so that it could raise funds to support sea turtle care. About 2 AM, a sleepy volunteer sat bolt upright and said, “N.E.S.T., Network for Endangered Sea Turtles. “ In 1996, N.E.S.T. was incorporated under North Carolina law and was granted 501c(3) non-profit status by the IRS with Millie, the NCWRC permit holder, as its first president.

Rehabilitation efforts started at the grassroots level. Millie traveled to Topsail Beach to learn about turtle care at the Karen Beasley turtle hospital. Dr. Mary Burkhart and Dr. Mark Grossman, of the Roanoke Island Animal Clinic performed exams, took x-rays, and gave treatment guidance. Trained volunteers took the injured or cold stunned turtles into their homes, using bathtubs and kiddie pools. For the first 24 hours, they used tap water to keep the turtles from dehydrating. Then, with salt furnished by the Aquarium, they moved them into to salt water. Volunteers were taught some basic treatment techniques such as massaging cold-stunned turtles to warm them; and force feeding, for which they used a plumbing pipe elbow to keep a turtle’s mouth open while administering a fish gruel. They also cleaned carapaces and applied antibiotics. The Coast Guard then transported the turtles back into the ocean.

It quickly became evident that a proper rehabilitation facility was needed. Open-air space was provided behind the North Carolina Aquarium on Roanoke Island for three holding tanks, one for making salt water and two for holding turtles. With no roof at first, volunteers worked in all kinds of weather cleaning tanks, feeding, and performing treatments. Improvements included a covering tarp and space heaters. A grant from the Outer Banks Community Foundation, the generous cooperation of a local builder, and some volunteer muscle produced a building with 2 large and 3 smaller tanks, indoor plumbing, heat, and sanitary treatment conditions. The building was donated to the Aquarium, with volunteer staffing provided by N.E.S.T.

Then, in 2014, the STAR (Sea Turtle Assistance and Rehabilitation) Center was opened, greatly expanding the facilities. The operation of the rehabilitation center is managed by trained aquarists on the Aquarium staff. Veterinary services are provided by full-time Aquarium Society staff. Daily feeding, water cleaning, and minor maintenance are performed by N.E.S.T. and Aquarium volunteers.

Education has always been a priority

The Education Committee was the first committee established, in line with the organization’s mission statement. School programs and community events have been used to inform the public about the plight of endangered species and the importance of clean beaches.

The Dare County Education Curriculum Project was formed in 2017 to research and develop a curriculum notebook covering the life of a sea turtle. Each lesson plan is aligned with the North Carolina State Standards. The second half of the notebook includes a recommended reading list as well as research documents. As of 2022, the project has included 3 of the 5 elementary schools. By 2024, it will be a regular feature in all elementary schools in the county. This project gives the schools teaching tools with book money for 2 years and trips to the Sea Turtle Assistance and Rehabilitation Center (STAR). The library/media center in each school has become the center of turtle activities for grades K-5 with a life size model loggerhead.

Monitoring begins when a nest is laid. The nest sitting process usually begins sometime between Day 55 and Day 65, depending on several weather related factors. On occasion a group of volunteers could be on the beach every evening for 2 or more weeks waiting for action. In 2016, a committee was established to find scientific applications that would address this uncertainty. Hydrophones at nest sites allow us to hear vocalizations and other sounds made by embryos and hatchlings close to the time of emergence. Data loggers help us better understand how temperature impacts incubation and embryo/hatchling viability. It is now possible to predict within a day or two when hatchlings will emerge from the nest. The data collected also helps assess the viability of late season nests and those which were washed over frequently by comparing the temperature inside the nest to that of the adjacent sand. This committee collaborates with the NC Wildlife Resources Commission, the  University of NC Wilmington, the US Fish and Wildlife Service and the National Park Service.

Return sea turtles to the ocean as soon as possible

It has always been N.E.S.T.’s philosophy that sea turtles should be returned to the ocean as soon as they are well. The Coast Guard has over the years been very supportive of endangered sea turtle conservation. On their scheduled winter cruises, they take the healthy turtles to the Gulf Stream, where the water temperature is in the 70’s. On occasion, a captain will volunteer space on a charter fishing boat. Turtles released from late April through the summer can be released from shore, thanks to the warm summer temperatures. Care of endangered sea turtles along the length of beach from the Virginia line to Ocracoke Island is the responsibility of all Outer Banks residents as well as local, state, and national  governments. Together with the North Carolina Wildlife Resources Commission, the North Carolina Aquarium on Roanoke Island STAR Center, the Cape Hatteras National Seashore, and the US Coast Guard, we have in place a very successful partnership dedicated to ensuring the viability of this endangered species as a very special feature of the Outer Banks.

Current Board of Directors