For the past few years some nest parents and volunteers used stethoscopes to listen for noise made by embryos/hatchlings as they hatch and then make their way to the surface of the sand. During this time, it is thought hatchlings are getting organized, likely communicating with each other through subtle vocalizations and body contact to improve synchronization for emergence. There is also time for the closing and straightening of the plastron (bottom shell). From pipping (when eggshell is first slit) to emergence takes on average about 5 days.

In 2017 N.E.S.T. invested in multiple hydrophones, highly sensitive waterproof microphones. The microphone is buried in the sand near the nest and transmits sound through a long cable to ear phones, a speaker and or a recorder. By using the microphone more sounds were heard and everyone at the nest could listen. Pipping (hatchlings breaking their shell) and early movement sound like someone tapping and or “moving furniture.” The falling sand of a hatchling making its way to the surface sounds like a “waterfall” or even a “roaring waterfall” when hatching is imminent. 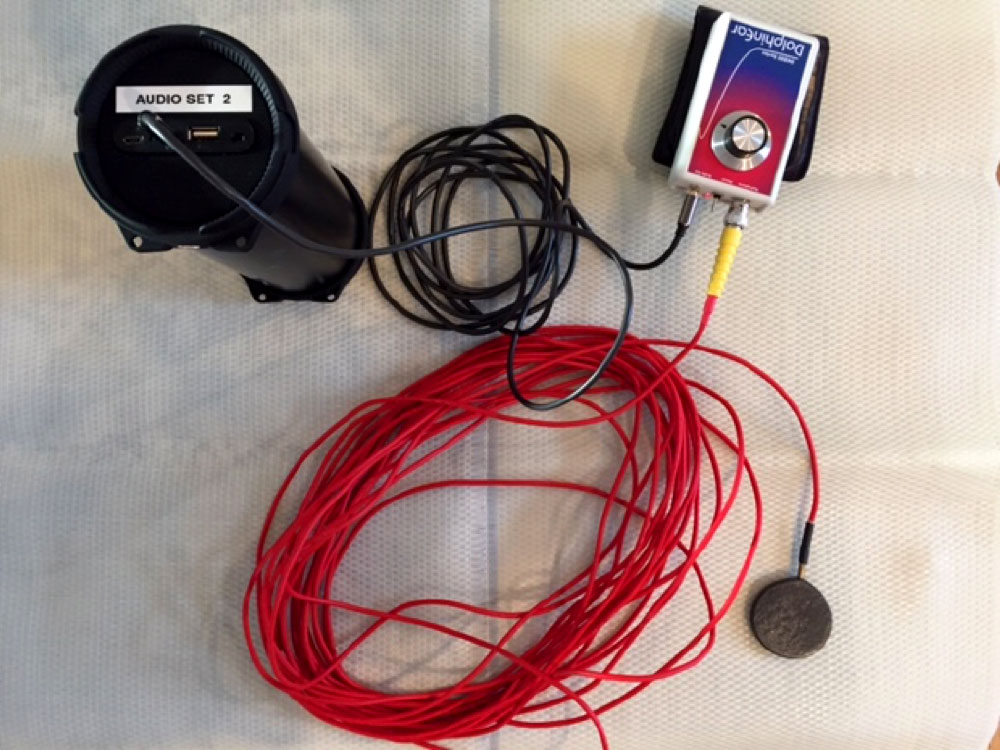 Nest 16 was a late nest. Nest parent, Susan Silbernagel, was due to have her team start sitting the nest on day 65.  On day 63, during the first spot check with a microphone Susan’s team heard “furniture moving” sounds and the next day rat tat tat sounds.  They were encouraged that despite the lateness of the nest, the embryos were alive and they would get a hatch. On day 65, however, no sounds were heard and there was only silence every day after that. What had happened?

On day 90 the nest was excavated.  Susan’s team found cracked eggs (pipped) with fully developed embryos but not a single embryo had found its way out of the shell.  The sounds heard (furniture moving and tapping) may have been the sound of the embryos pipping. The embryos, however, were unable to make it out.  A possible clue is that the average nest temperature was about 79˚F, a good 4 degrees below the optimum range that produces strong, vigorous hatchlings. In addition, the average temperature from day 54 to day 63 was a cold 74.4˚F. So presumably, the embryos were too weak to emerge.

Note: During the quieter times you can hear ambient noise of voices, wave action and sand blowing.

This recording was taken on Nest #12 in Nags Head on August 8, 2019 & represents furniture moving sounds

This is a recording of rustling and vocalizations taken on Nest #11 August 10, 2019

This is a 25 second recording of Nest 12 recorded on August 10, 2019, 4 days before emergence. You will hear rustling and 2 short vocalization.

This is a 33 second clip of 2018 nest #13. You are hearing Loggerhead hatchlings (or embryos) vocalizing while still in the nest, several days before they emerged. You will need to listen closely!

This is a recording of 2017 nest 14 furniture moving sounds and early water fall.

This recording is of 2017 nest 1 shortly before a hatch.  The intense waterfalls sounds come in waves as the hatchlings are making it to the surface.

The video below is the emergence of nest #13 in Kitty Hawk. We successfully attempted to record Loggerhead hatchlings vocalizing in the nest. This nest emerged on the evening of September 3, 2018 & provided us the opportunity to video a classic boil! At the end of this video we have included a short clip of vocalizations. These were not recorded at the time of emergence, but rather several days before when the hatchlings were still deep in the nest.

Nest #19 was laid July 19, 2018. Mom laid it right at the high tide line, so it had to be relocated to a safer spot. We were surprised to find two sets of triple eggs & nine twin eggs. What would this nest produce?? Then along came Florence & over washed the nest site, but it survived to produce 71  hatchlings. This little guy came out the second night by himself. Watch & enjoy as he makes his way to the ocean.