July Releases from the Star Center 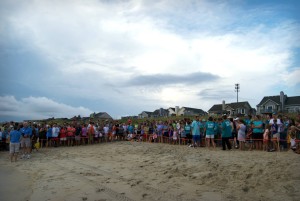 In July, the STAR center at the NC Aquarium on Roanoke Island held their second release of the summer in Nags Head!  Three turtles were ready to go home: Neptune, Artemis and Otter.

This year was our worst cold stun event to date.  After a warm December, many sea turtles didn’t migrate to the Gulf Stream as they instinctively should.  When the temperature dropped in January, sea turtles were caught in the cold water. Being exothermic animals, they became hypothermic, or “cold-stunned.”  Their body shuts down, and if they’re lucky, they wash ashore where they can be rescued by N.E.S.T and Buxton volunteers and taken to the STAR center.  Neptune was one of these turtles. Found in Frisco on January 5th, 2016, (s)he came in weighing only 80 pounds, much less than (s)he should have weighed at her size, and covered in barnacles.  For an unknown reason, (s)he hadn’t been eating well in the ocean, and the cold stun was too much for her/him.  Neptune’s temperature was only 45 degrees Fahrenheit, and her/his PCV (packed cell volume, or a measure of red blood cells) was only five. Normally, PCV should be around 25-30.  Near death, her/his heart rate was only one beat every three minutes.  (S)he was warmed up slowly (only five degrees per day until (s)he reached 70 degrees), and her/his condition steadily improved.  (S)he began eating a couple weeks after arrival, and gradually gained enough strength to be able to swim and breathe well in a full tank of water by the beginning of February.  When her/his PCV didn’t improve on its own, Neptune was given iron injections during the month of May.  At the end of June, Neptune’s PCV was up to 29, weight was 111 lbs, and the vet cleared her/him for release!

Found floating and lethargic in a salt water creek in Buxton on April 6th, 2016, Artemis only had a heart rate of two beats per minute and glucose of 48 (when it should have been over 100).  Her/his cause of illness is still a mystery.  Despite perking up while in the STAR center, her/his weight had dropped from 3.2 kg at her/his arrival to 2.8 kg very quickly.  (S)he was monitored in the STAR center and fed fish and green peppers daily, and by the end of June her/his weight had bounced back to 3.2 kg and (s)he was ready to go!  Unfortunately, we will never know what caused Artemis to become sick.  There is still a lot about sea turtles we don’t know.  Some of our patients will never be diagnosed with certainty, and we can only treat the symptoms/effects of the unknown cause.

One of our long term patients, Otter was brought in from Frisco December 14th, 2014 during a cold stun event weighing 2.6 kg.  Despite the resolution of his hypothermia, Otter wouldn’t eat for three months and had to be force fed.  In mid-March, 2015, one of the STAR technicians noticed something odd in his stool.  Upon further inspection, it was discovered (s)he had passed a green latex balloon! Only a few days later, (s)he passed a food label and paper.  Otter had a gut impaction that he luckily was able to pass on her/his own.  Radiographs (or x-rays) are taken of every new turtle, including Otter.  However, unless the object is metallic it cannot be seen on the radiograph.  (S)he started eating well, but her/his battle wasn’t over.  (S)he developed osteomyelitis, or a degradation of the bone, in her/his right front elbow joint and left rear knee joint.  The cause of this illness is unknown, but it is hypothesized by researchers and our veterinarians to be related to the cold stunning.  Otter was given antibiotics and pain medications, and had to wait until the illness became “non-active,” which is determined by x-rays.  (S)he was placed in on exhibit in our large tank in Operation Sea Turtle Rescue, and finally in June of 2016, the veterinarian cleared Otter  for release! Before the release, Otter was a whopping 6.2 kg, and her/his shell had grown in length by over 10 cm!