Leatherback – named for its unique shell which is composed of a layer of thin, tough, rubbery skin, strengthened by thousands of tiny bone plates that makes it look “leathery”.

The largest of all living sea turtles and the fourth largest modern reptile behind three crocodilians. Head has a deeply notched upper jaw with 2 cusps and is the only sea turtle that lacks a hard shell. Instead of scutes, it has thick, leathery skin with embedded minuscule osteoderms. All flippers are without claws. Seven distinct ridges rise from the carapace, crossing from the anterior to posterior margin of the turtle’s back. The carapace is dark grey or black with white or pale spots, while the plastron is whitish to black. Hatchlings have white blotches on carapace. 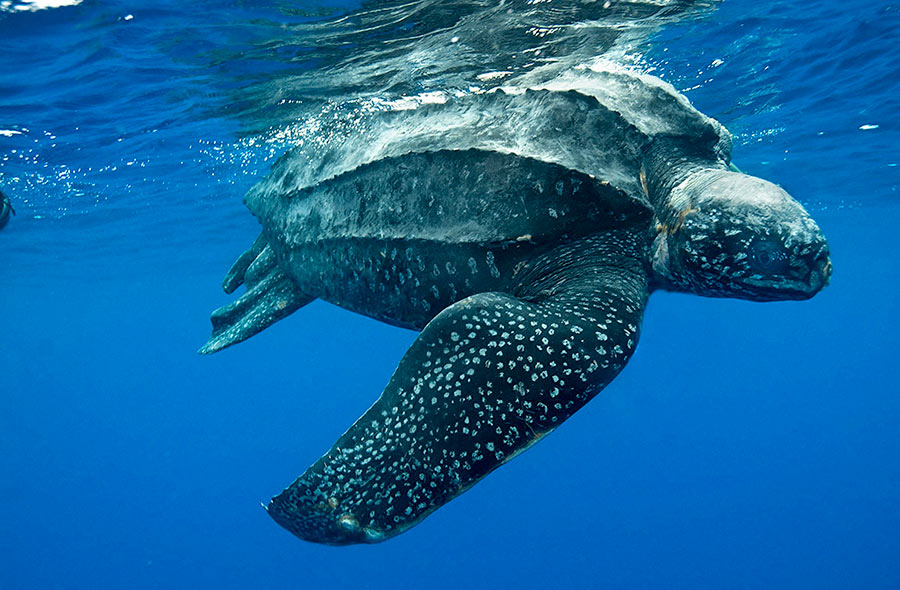 Leatherbacks have delicate, scissor-like jaws. Their jaws would be damaged by anything other than a diet of soft-bodied animals and organisma. Jellyfish are the main staple of its diet, but it is also known to feed on sea urchins, squid, crustaceans, tunicates, fish, blue-green algae, and floating seaweed.

Primarily found in the open ocean, as far north as Alaska and as far south as the southern tip of Africa, though recent satellite tracking research indicates that leatherbacks feed in areas just offshore. Known to be active in water below 40 degrees Fahrenheit, the only reptile known to remain active at such a low temperature.

Female Leatherback Turtles, between the age of 6 to 10, will usually mate every 2 to 3 years. 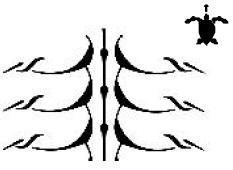 Female Leatherback Turles may lay as a many as nine clutches within a nesting season (average 4 to 7 times per season), with an average of 10 days between nestings. Lays an average of 80 fertilized eggs, the size of billiard balls, and 30 smaller, unfertilized eggs, in each nest. Eggs incubate for about 55 – 75 days. Unlike other species of sea turtles, leatherback females may change nesting beaches, though they tend to stay in the same region.

International – Listed as Critically Endangered (facing an extremely high risk of extinction in the wild in the immediate future) by the International Union for Conservation of Nature and Natural Resources (IUCN).

Adult Leatherback Turtles have few natural predators once they mature; they are most vulnerable to predation in their early life stages. Very few survive to adulthood. For those that do survive to adulthood many human activities indirectly harm the population.

As the largest living sea turtles, turtle excluder devices can be ineffective with mature adults. A reported average of 1,500 mature females were accidentally caught annually in the 1990s. Longline fisheries have also pushed the Pacific subpopulation to the brink of extinction. Pollution, both chemical and physical, can also be fatal. Many turtles die from malabsorption and intestinal blockage following the ingestion of balloons and plastic bags which resemble their jellyfish prey.