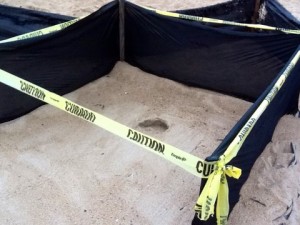 After waiting patiently for almost a week, NEST parents Shelley and MaryJane and their team counted 74 hatchlings that made it to the ocean in our first emergence of the year! Volunteers had been waiting since day 55 at the Southern Shores nest, and on day 61, the turtles decided it was time to reward them for their efforts.  At about 8:30 PM, without so much of a sinkhole as a warning, some tiny turtle heads and flippers emerged from the sand. A little after 9 PM, 73 turtles emerged in a boil and made their way to the ocean. Thanks to NEST volunteers and beachgoers the hatchlings made their way without as much as a pinch from a single ghost crab. 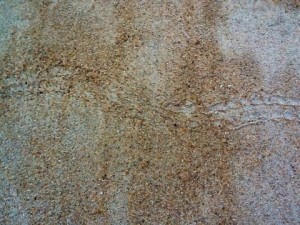 Number 74 left this trail in the sand

Just in case a few extra turtles decided to emerge later, volunteers remained on site until about midnight. At that point, the trails from the emerged hatchlings were cleaned off so that if any hatchlings decided to sneak out after the volunteers left, their new trails would be evident. Sure enough, one sneaky devil left his tiny little crawl for the nest moms to find in the morning.

Horray for our first hatchlings (and NEST volunteers)!