Recently here on the Outer Banks, a dangerous combination of storms including Sally, Teddy, and a cold front, wreaked havoc on our unhatched sea turtle nests. Before the storms, there were 15 nests still in the ground in N.E.S.T. territory from the NC/Virginia line to South Nags Head. The storms hammered our beaches for over a week. Our incredible N.E.S.T. volunteers led by Karen Clark of the NC Wildlife Commission did everything possible to save the nests. Depending on the situation, nests were relocated or excavated early or berms were built. In some instances, the storms simply took charge. In some areas several feet of sand was deposited on nests and in others nearly all of the sand covering the nests was sent out to sea.

Once sea turtle embryos hatch, they typically spend 3 to 5 days under the sand getting organized and readying themselves for the long swim to the Gulf Stream. The closer the nest is to emergence the more oxygen is needed by embryos or hatchlings and the more likely it is that prolonged inundation will lead to a lethal event. While we lost some nests, others were saved due to the inspiration and hard work of our volunteers.

The photos below tell our story. 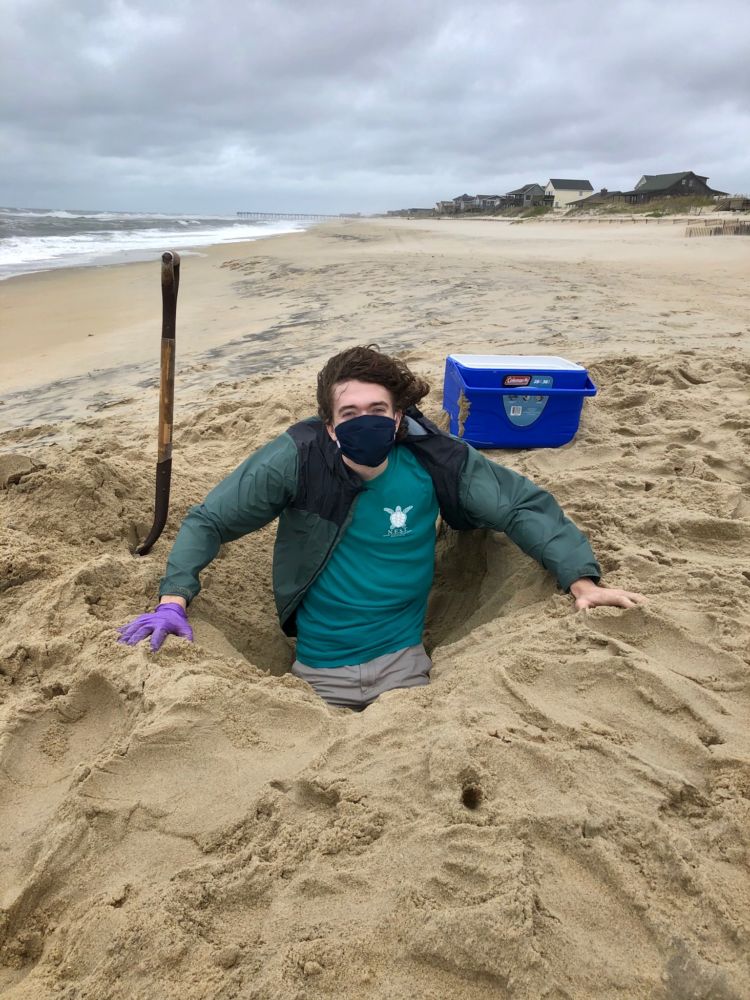 Nest 33 was frequently washed over by the tides and covered by an extra two feet of sand during the storms. The nest was relocated to a safer spot by incredible NEST volunteers. Six foot tall junior NESTer, Jack, is in the hole made after the eggs were excavated in order to move the nest. When this nest was laid the top of the nest was 17 inches beneath the surface of the sand. Photo by Stephanie Westheiden 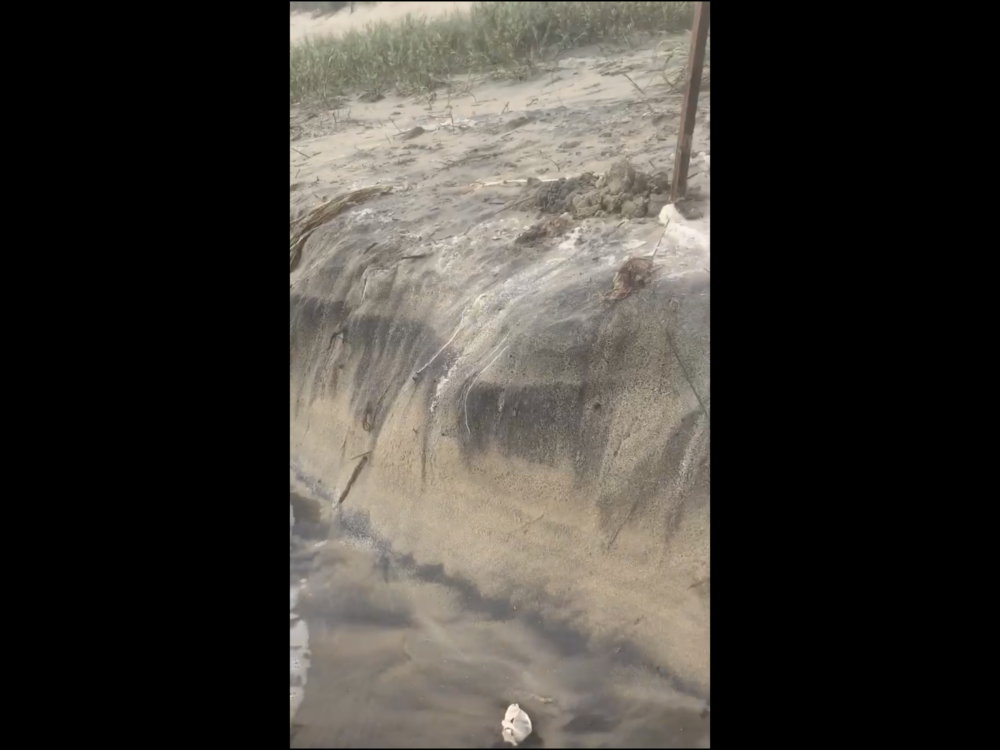 Nest 25 was cut in half by a dramatic escarpment. This nest was ready to emerge and was helped along by the storm. You can see an empty eggs shell at the bottom of the picture. Still from video taken by Brenda Martin 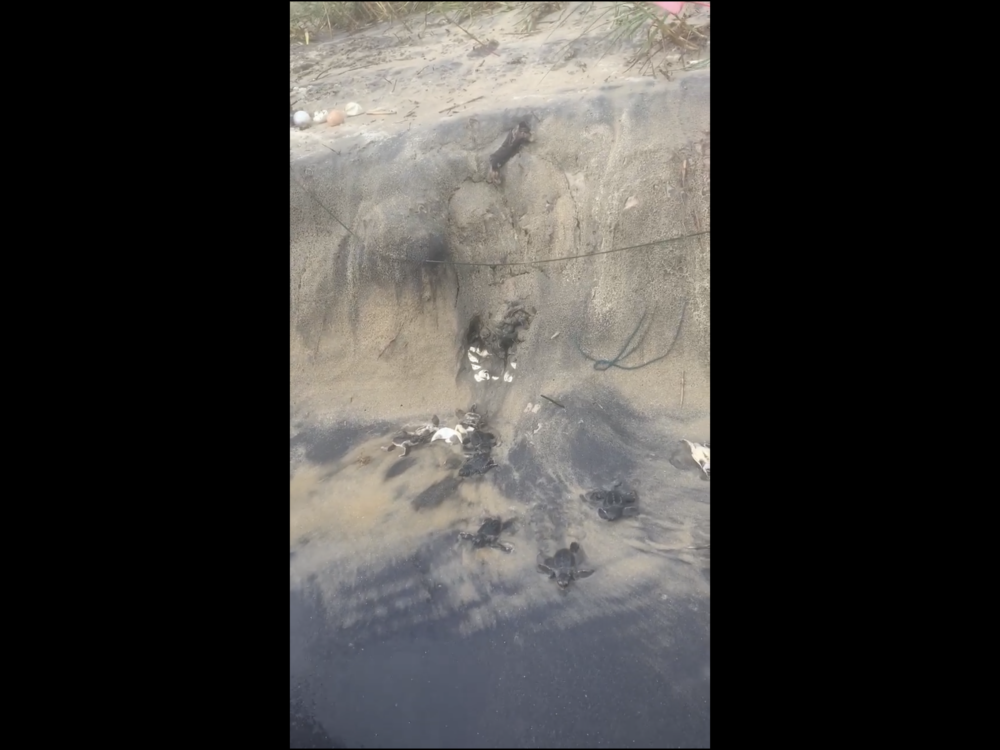 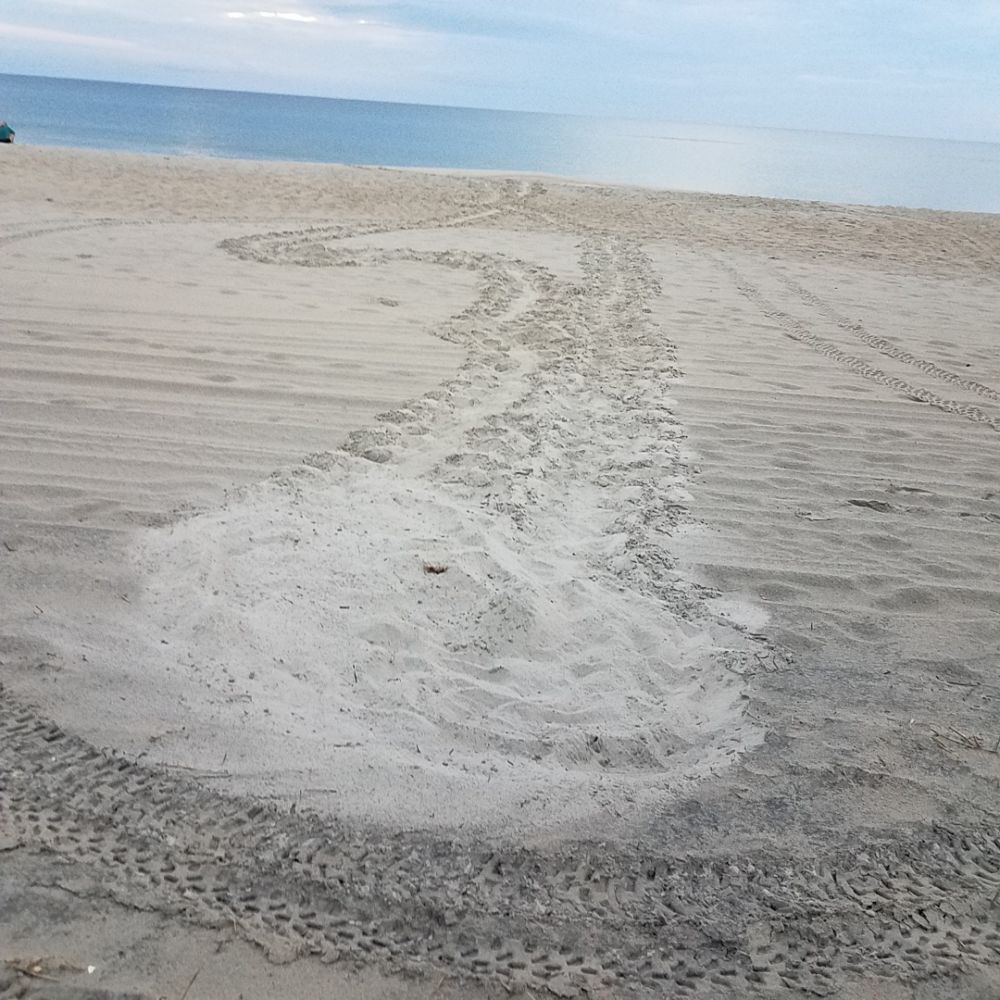 This is Nest 23. As you can see, the nest was originally laid a long distance from the high tide line. Unfortunately, the power of the ocean changed things during the storms. 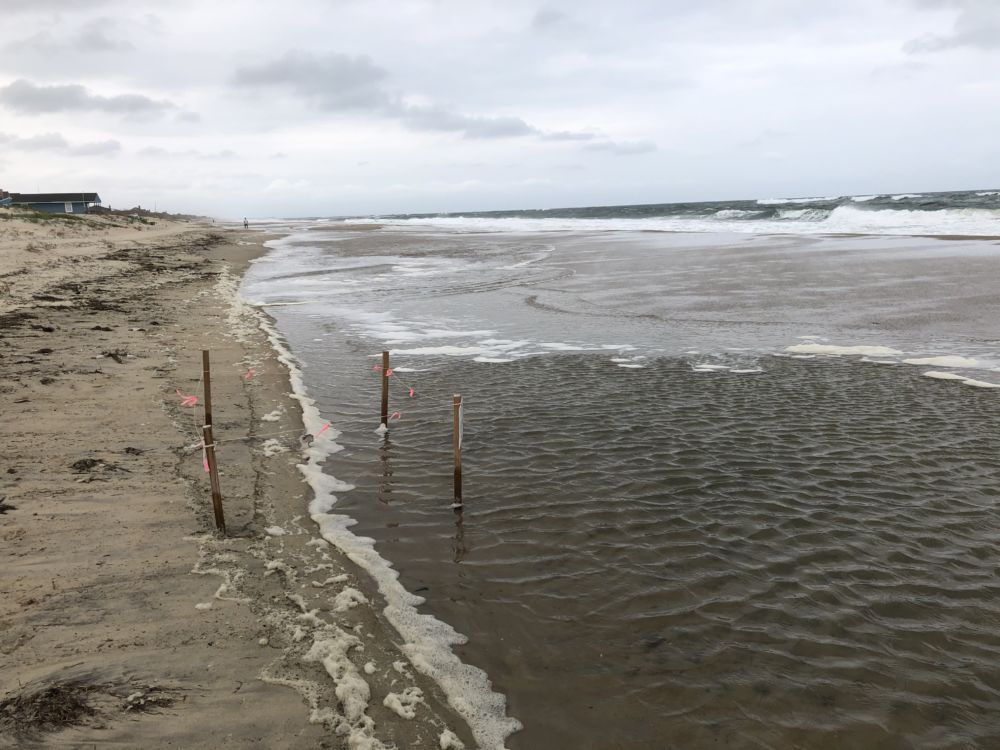 Nest 23 underwater during the storms likely drowning the hatchlings. The nest is now days overdue with no sign of life. Photo by Stephanie Westheiden 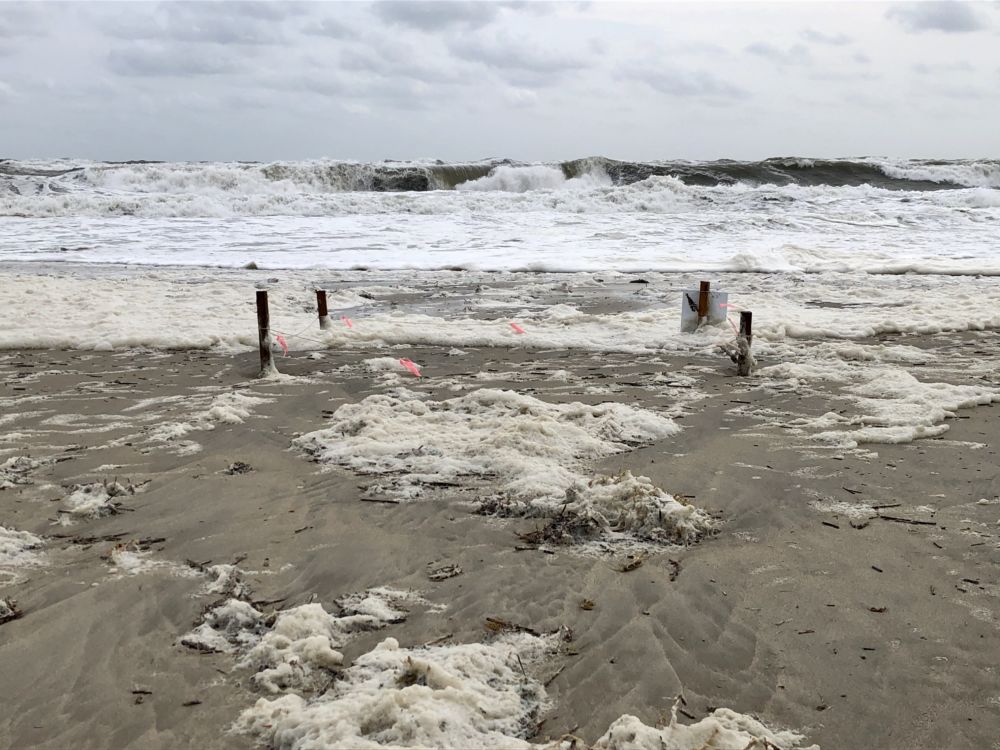 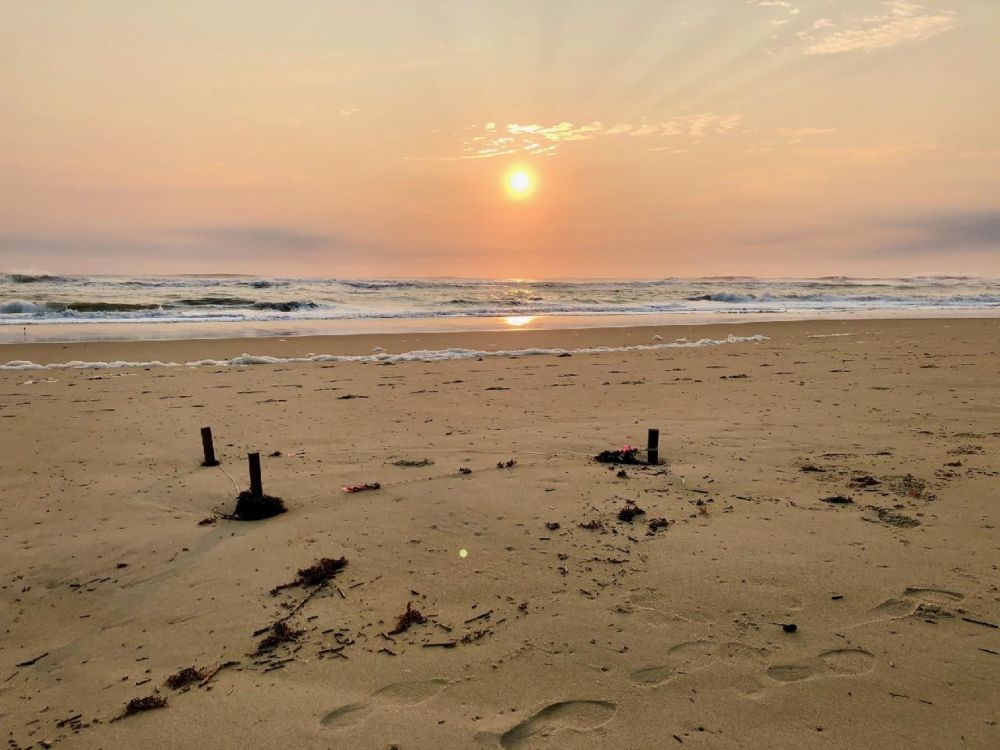 Nest 23 has about 2 feet of extra sand deposited. The stakes you see should be sticking out about 2.5 feet from the surface of the sand. Photo by Stephanie Westheiden

Thanks to a lot of effort by volunteers, Nest 28 was a successful nest with 73 out of 84 hatchlings making it out.  The nest was laid in an area of short beach in Kitty Hawk between reaches of sand fence.  Even that high location was not enough to protect the nest from the storms. 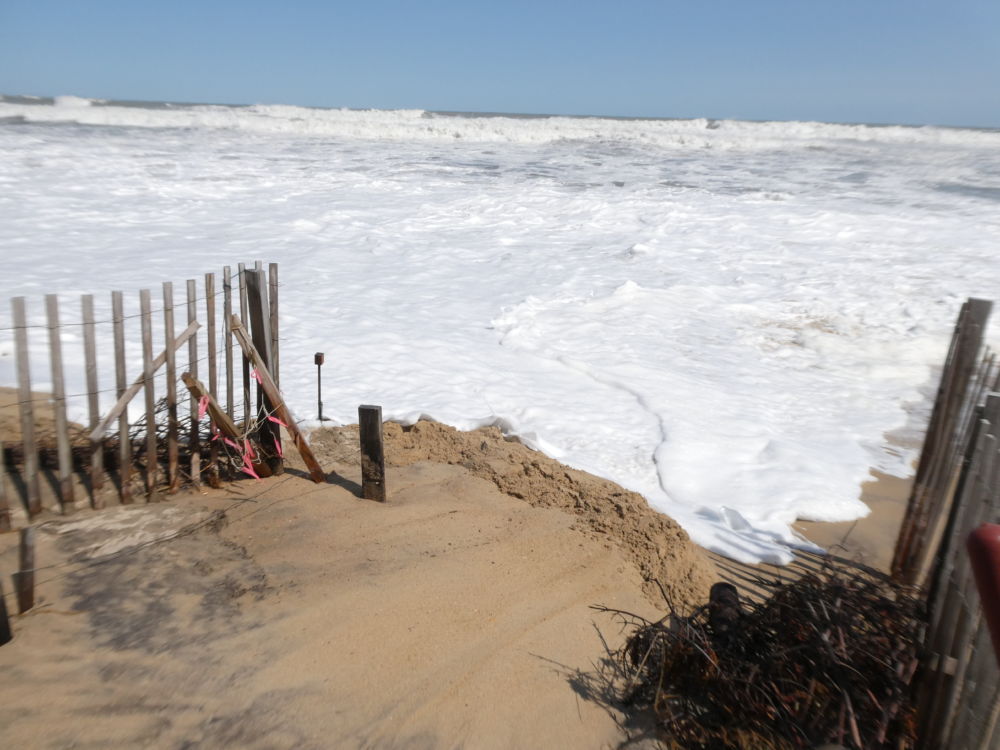 Volunteers built a protective berm in front of the nest. Photo by Bob McCormick 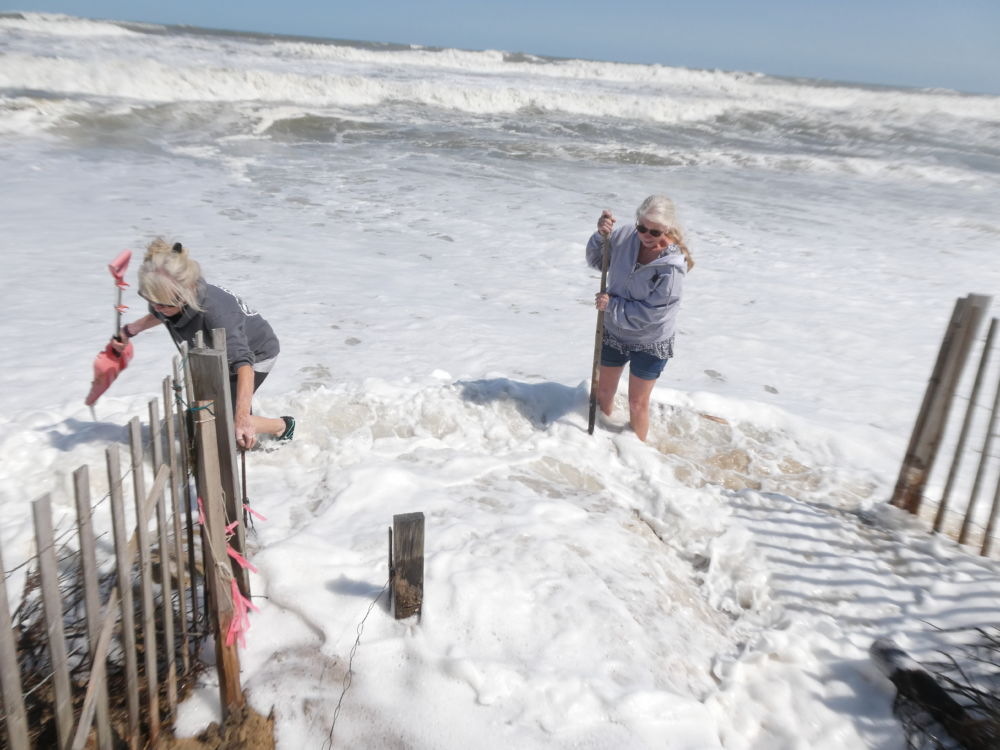 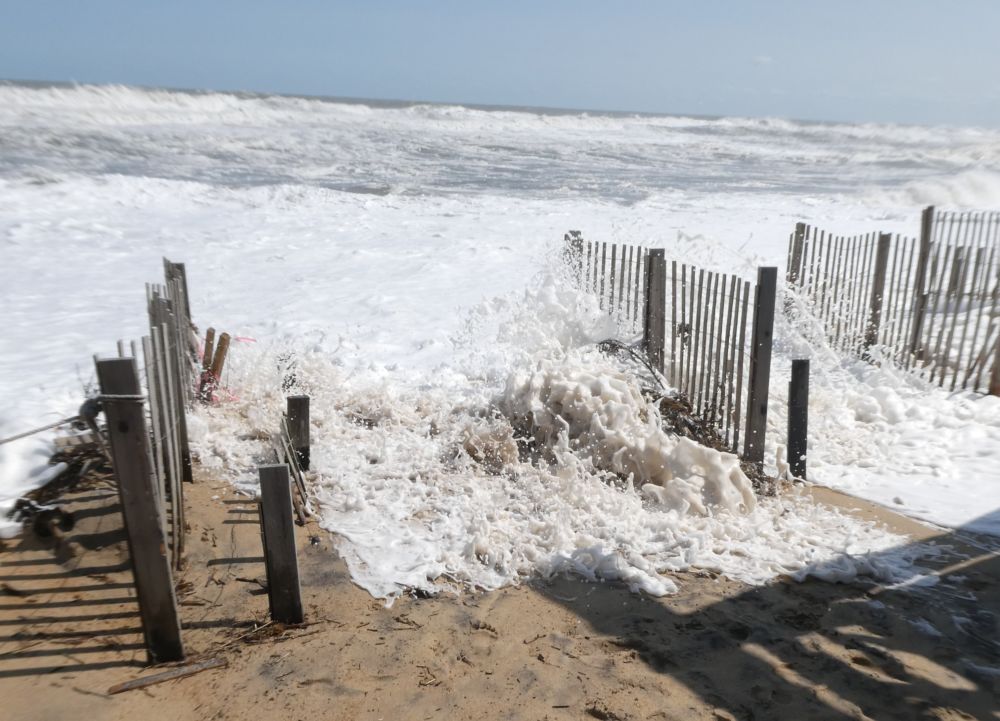 Nest 28 was excavated early so despite the power of the ocean the hatchlings made it out! Tough Hatchlings! Photo by Bob McCormick